I have a confession to make.

Cooper sleeps in our bed.

I know, I know, there are plenty of reasons that this is a bad idea.  Maybe tops among them, Cooper’s future People may not want a bed-mate.  Breaking him of this habit could prove to be a difficult chore should he get adopted into a home with a “no dogs in the bed” rule.

Believe me, I know.

But life is short, and dogs’ lives are shorter.  Fostering is tough, and we do what we do to get by.  When Cooper let us know is no uncertain terms that crate training was not for him, we had a choice to make: force him through it, or find other ways to work through the destruction and accidents.  We chose to work through them.

And Cooper’s progress really has been amazing.  The side effect of our choice is that Cooper has figured out a soft bed snuggled in between mom and dad is a pretty great place to count sheep.  No big surprise, since he’s such a love bug. He knows our bedtime routine, and he’s learned that if he’s not careful when he jumps on the bed and lands on Oscar, he’ll get a corrective growl and little nip from his big brother.  Coop has no problem making himself comfortable, sometimes spooning with foster dad and kicking foster mom in the kidneys, sometimes the other way around. Sometimes he lies on his back with is feet in the air.  Sometimes he wedges himself between the wall and my pillow, with his front and back legs on either side of my head.  Or he’ll curl up in a ball over my shoulder and lay his head on my chest with a big content puppy *sigh* and synchronize his breathing with mine…this one is my favorite.

Yep, Cooper sleeps in the bed.  And I’ve come to love it.

But then the other night, something…well, strange happened.

My schedule is pretty crazy sometimes, so I was getting home late after Foster Dad was already in bed.  I opened the door and wasn’t too surprised that I wasn’t greeted by two waggly brindle butts – it was, after all, bed time.  From the front door of our one-story ranch house I can see all the way down the hallway to the master bedroom.   As I started to walk towards the back to say hello to my men (furry and otherwise), Cooper came wandering, sleepy-eyed, out of the guest room. 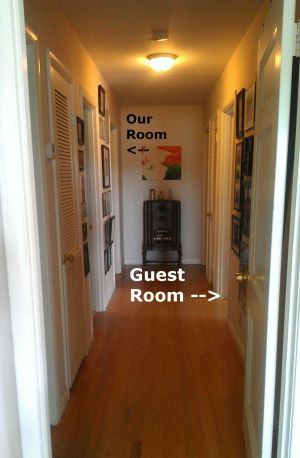 This was odd because the only (only) time I’ve ever seen Cooper in the guest room is when he follows me in there…because as I’ve mentioned before, he’s a shadow.  I went in to check it out and sure enough, there was a Cooper-sized spot in between a folded up quilt and the guest bed pillow that was suspiciously warm, as if a Cooper-sized body had just been snoozing in it moments ago. 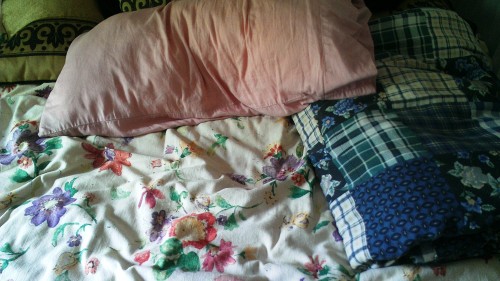 Foster Dad confirmed, when he and Oscar went to bed, Cooper decided to try out the guest room.  I guess he found it pretty comfortable, because he completely snubbed us that night and chose the guest room over us.  Over us!  Har-umph.  I didn’t know whether to be offended or a little bit proud of our boy for branching out and asserting some independence…

…until about 3 AM when he got startled by a passing truck and darted back into our room, where he stayed until morning.

If you can’t wait for Cooper to keep you warm at night, please fill out an adoption application with Agape Animal Rescue.