Our First Foster – One Year Later

The first dog we fostered through Agape Animal Rescue was Tucker.  But before Tucker, there was Barney.

Last year, Foster Dad and I were starting to kick around the idea of fostering dogs.  Oscar had been with us for a year by that time, and we were head over heels for this dog.  We always knew we were “dog people,” but turns out – we were full on “crazy dog people.” We talked about Oscar constantly. We plastered our Facebook pages with his picture.  We celebrated his birthday.  We always knew we’d want to be a two-dog house eventually, and we figured if having one dog was this awesome, than having two would be twice as awesome, right??

We weren’t in a hurry though.  We knew that when the time came that we would rescue again,  because for us the most important thing about adding another furry member to our family was helping a dog in need.  With that in mind, we started talking about fostering.  Casually, nothing serious.

Barney wandered into our lives a year ago this week.  Now, we see stray dogs in our area of town all the time. All. The. Time. But when I saw Barney running down the side of the road that early morning, there was something about him that I couldn’t ignore.  I just had to pull over and see what was up.  I had no idea if he’d be interested in me at all, or if he’d bolt.  I hadn’t planned on chasing a dog through South Nashville streets all morning, so I told myself if he didn’t come to me easily, I’d assume he was on his way home. 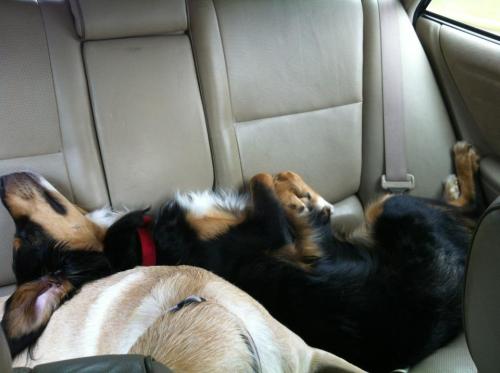 After I pulled a stop and got out of the car, I turned to face him, crouched down and said cheerfully, “Hey buddy!”  He stopped dead in his tracks, and only considered me for a moment before bolting straight towards me and climbing into my lap, tail wagging a mile a minute.  Well, it was settled.  He was coming with me. 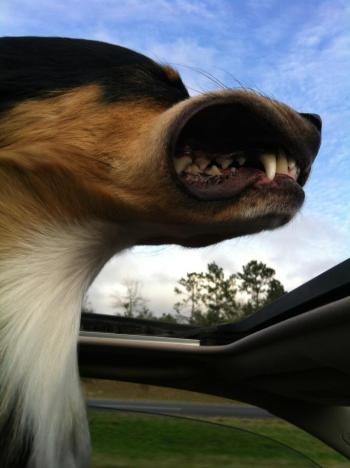 I called Foster Dad on the way home to tell him what I had gotten us into, and he was totally on board.  “Well, you couldn’t just leave him there! Bring him home!”  We did our due diligence….checked for a microchip (nope), looked on Craigslist, Petfinder, etc for lost dogs matching his description (nothing), and papered the entire area with FOUND DOG fliers to see if we would get any hits (not one).  However, when we posted him on the local Facebook page and asked our neighbors if anyone recognized him, we piqued the interest of Ted & Amanda.

The recognized him, alright.  They recognized him as they newest member of their family.  They had been thinking about getting another dog as a playmate for their yellow lab, Bella.  When they saw Barney’s picture, it was insta-love.   One week after Barney entered our lives, he was off to live with his new family. 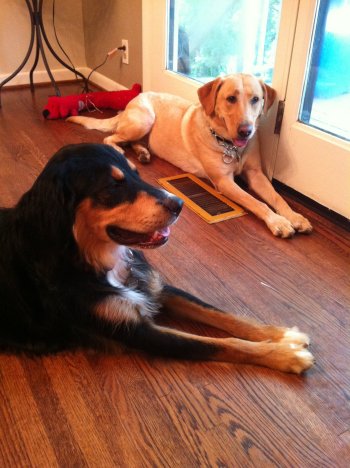 Barney may not have been an “official” foster dog.  He wasn’t affiliated with a rescue organization, he wasn’t pulled out of a shelter, neutered, or vetted.  None the less – he was our foster dog.  Our first one.  We found him, sheltered him from the elements, and gave him food and water.  We bathed him and trimmed the matted hair from under his ears and belly.  We invited him into our home and loved him. And when the time came, we said goodbye. We’re counting him, and we’re adding him to the “Success Stories” column.  He really should have been there from the beginning.

Happy Adoptiversary, Barney!
And just like we say to all our foster dogs…we love you forever, and we’ll never forget you!

6 responses to “Our First Foster – One Year Later”