If you follow us on Facebook, you know that Cooper and Oscar got into a bit of a disagreement last week, and Cooper came away with an ouchie his adorable tushy.  We were having some issues with our inter-web at Foster House, so the internet guru man came over to fix us up. While he was there, we let the dogs play outside to keep them out of his hair.  I heard Oscar start barking, which isn’t abnormal – he does that a lot. But something about his bark made me want to go out and check on them.

When I got down the stairs to the yard, I saw Oscar barking at something under the stairs. My first thought was that he had a mouse or something cornered under there that I was going to have to deal with (ew). But nope, it was Cooper under the stairs, hunkered down and going to town on some unidentified object, an object that Oscar clearly wanted for himself.

Now, Foster Dad and I both know that Oscar is a bit of a brat when it comes to sharing, so we make extra special sure not to leave any toys around the two of them unattended, and they never get bones antlers or Kongs or anything to chew on while they’re in the same room together. 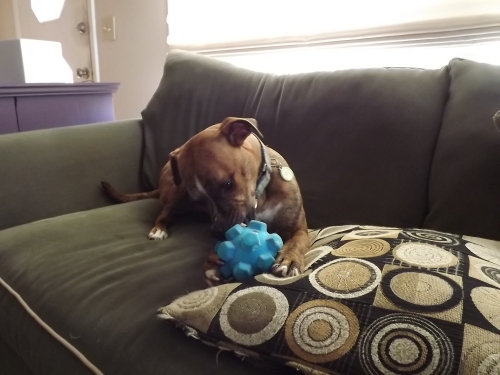 So imagine my shock (and horror) when I got closer and saw that what Cooper was going nuts on was a rawhide bone. The first thought through my head was “Where the hell did that come from? We don’t give the boys rawhide.”  My second thought was, “Oh sh*t.”

No sooner had my second thought entered my brain than the dogs found themselves in full-on disagreement mode. Foster Dad heard the scuffle and ran out right away to help me separate them, and took that evil rawhide bone and chucked it out into the front yard to be dealt with later.

It was all over very quickly, but Oscar was clearly the one who came out on top of that situation. Thank you everyone who shared your concern for Coop, but rest assured, he’ll live.

…which brings us to our next installment in our series 28 Things You’re Gonna LOVE About Cooper!

#16 He has super- puppy healing powers

Right after “the incident,” we examined both the boys to make sure everyone was OK. Oscar didn’t have a scratch on him, but Coop had what looked like two little puncture wounds on his tush. They weren’t very big, and they weren’t bleeding, but they were definitely deep. We made an appointment for the vet later that afternoon to get him patched up. 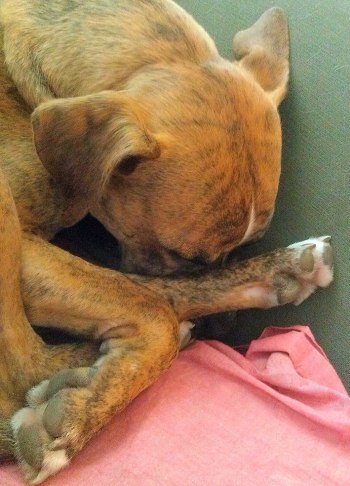 But Cooper was obviously not interested in going to the vet, and most likely having his tushy shaved.  Several hours later, Cooper was snuggled with me on the couch (as usual) and I was checking out his wound. And wouldn’t you know, that crazy Cooper went and healed himself! All that was left of his “punctures” were two little pink patches. No punctures at all.  What the what? 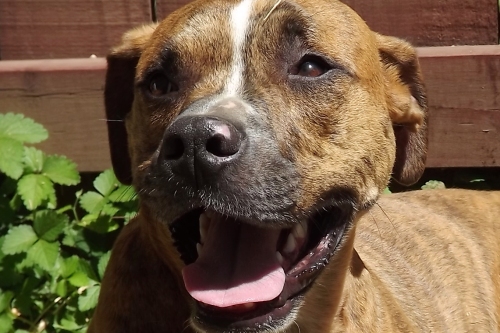 Foster Dad and I were totally baffled, but of course thrilled that he seemed to be just fine!

**Disclaimer: Cooper may or may not have actual magical healing powers. Always take your pet to a medical professional if you are uncertain of their magical healing abilities.

If you’d like to add Cooper to your family, please fill out an adoption application with Agape Animal Rescue.

This next item about Cooper that you are going to LOVE is a very usefull trait, if you don’t happen to have a book or a shoe handy…

Have problems with an insect infestation? Don’t hire an exterminator, adopt Cooper!

If you’d like to add Cooper to your family, please fill out an adoption application with Agape Animal Rescue.

Cooper’s People are out there somewhere, we know it. And just in case they’re reading this blog,* we’ve been speaking directly to them  in our series “28 Things You’re Gonna LOVE About Cooper.”
*Shameless plug: won’t you please help spread the word about Cooper by sharing this blog with a dog-lover you know? It’s all about networking, people! Let’s find Cooper his home!!  OK, now back to business…

So, Cooper’s People, what else are you going to LOVE about Cooper once you add him to your family? Glad you asked…

Cooper has some tendencies that one might consider less-than-manly. Cooper pees like a girl (he’s a squatter, not a lifter).  He loves getting man-lovin’ from his brother, and his favorite ball is pink. 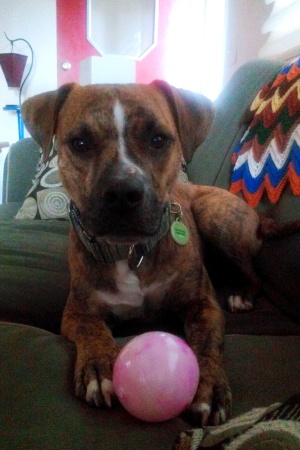 What you’re going to love about Cooper is that he is who he is, and he likes what he likes. And hey, we don’t judge. Who’s to say boys can’t like pink? We’re all about busting through stereotypes here at Foster House.

As much as Cooper loves his “girly ball,” you won’t need fancy expensive toys to keep him entertained. One of Cooper’s favorite things to play with is a kitchen floor full of wadded up newspaper.

I think it’s really just his way of staying up to date on current events.

If you want to add Cooper to your family, please fill out an adoption application with Agape Animal Rescue.