I could not believe it when I heard – Animal Rescue Corps was on the ground in Middle Tennessee once again, called to a property in Cheatham County on the evening of Thanksgiving.  When they arrived, they discovered 65 dogs living on chains, in what is suspected to be the largest dog fighting operation ever discovered in Tennessee. Operation Broken Chain was officially underway, and my heart was officially broken.

I watched the news in horror as I saw these poor precious dogs – most of them pit bull mixes – with heavy logging chains around their necks, tied to spikes in the ground. 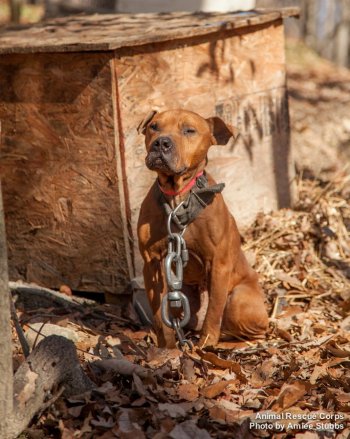 Some of them were so malnourished, with skin stretched so tightly over their bones, that they had open sores just from sitting on the ground. 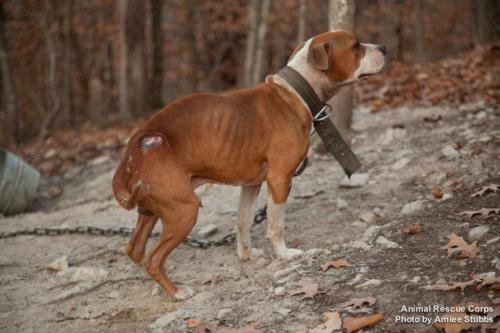 Others had scars on their faces and chests that told a gruesome story of abuse.

Along with the pit bull type dogs, there were a handful of Beagles and Hounds. One of the Hounds was pregnant, perhaps a side breeding business? Do I even want to know? 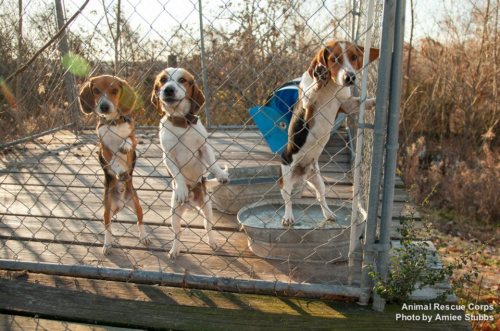 If their water dish was frozen over, how were they supposed to drink it??

Animal Rescue Corps has been in Tennessee seven times in the last several years, most recently with Operation Freedom this past summer, and Operation Sweethearts last year.  Does this mean that there’s a worse culture of abuse here than in other parts of the country? ARC president Scotlund Haisley says not necessarily. A lot of times, rural Animal Control offices simply don’t have the resources to handle such situations, and need the help. Thankfully, ARC is there to respond.

Just another day in the life of Agape Animal Rescue Director, Tanya Willis – kicking a$$ and saving lives.

Foster Dad and I spent this past Sunday out at the emergency shelter, set up in half of a warehouse in Lebanon, Tennessee.  It was cold and loud, but for these dogs it was the first place they’ve ever been “safe” in their lives.

This was such a different experience than the last couple rescues operations we’ve volunteered with. In Sweethearts and Freedom, most of the dogs were terrified of everything – especially us. But you guys, these dogs…in true pit bull fashion, these dogs wanted nothing more than human affection. As we distributed food and water, they were pushing against the doors of their cages trying to climb into our laps. As we passed by them, they would press their whole sides against their crates and wag their tails fiercely, in the hopes they might get a little scratch through the bars. And when we took them into the “potty area” to stretch their legs so we could clean their crates, most of them prefered to be in our laps covering our faces with sweet kisses, or chasing a rubber Kong around the room – experiencing “play” for the very first time. Every single one of them stole my heart. 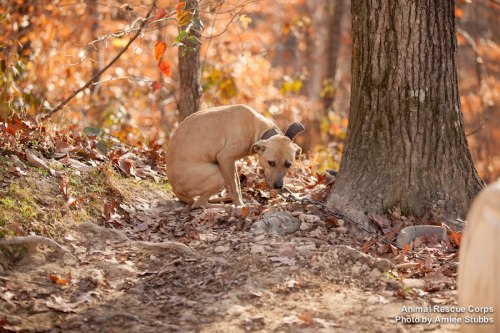 Every single one of these dogs embodies the word “resilience” – no amount of abuse or neglect could break their spirits.

That day was the first full day the dogs were at the shelter, which was focused on getting all the dogs initial veterinary exams and documenting their conditions. The dogs didn’t even have names yet – but one of them sticks in my mind. A sweet brown and white girl with severe crate anxiety – the way she gnawed at that thing, she bloodied her nose trying to escape. But when she got out and into the potty area, even though her bones were visible under her skin and she walked as though she was in constant pain, after some cautious sniffing…she started to prance. Actually prance around the enclosure, chasing after a Kong. It’s like she suddenly realized, “Oh yeah! I’m a dog and it’s awesome!” It was absolutely amazing to see.

Even though we’ve not been able to go back since Sunday, these dogs have been in my mind non-stop since then. As much as these cases break my heart, I try so hard to think of it as the happiest time in theses dogs’ lives so far. After all, their suffering is over.

Operation Broken Chain in the news:

How you can help.