I make it a personal quest to try as hard as I can not to think about Christmas until after Thanksgiving.  As much as I love the holiday, I find it harder and harder to love it the earlier I start seeing Christmas decorations in stores.  However, now that Thanksgiving has past, it’s go time – bring on the holiday cheer! 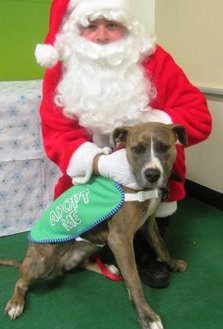 Kaylee visited Santa last year to ask for a family of her very own. And her Christmas wish was granted!

Last year, Emily over at Our Waldo Bungie put together a Secret Santa gift exchange with a handful of friends from the blogosphere who also foster dogs and have a love for pit bulls. They called themselves the Pittie Posse, and I had such a blast last year reading about all of the thoughtful gifts they exchanged.

Guess what? This year they’ve expanded – I’m so honored to have been invited to participate in the 2012 Pittie Posse Secret Santa gift exchange! 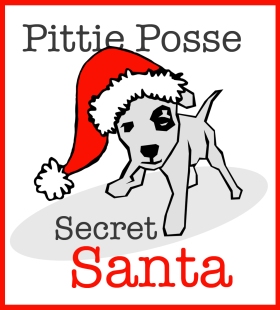 Also joining the Pittie Posse this year are Peace, Love & Fostering and Two Kitties One Pittie.  Man oh man, am I excited….I. Freakin’. Love. Secret Santas! I don’t know how I am going to wait until reveal day…which, by the way, will be Friday, December 21st.

In the meantime, we’ve been preparing Foster House for Cooper’s first Christmas. Since he has a certain, um, shall we say “destructive history,” we’re not sure how he’s going to react to all the decorations, not to mention a giant tree right in the middle of the room.  So we’ve been slowly trying to introduce the idea to him, by bringing in a bunch of tree trimmings we scavenged from our local Christmas tree shop and placing them on the floor where the tree will go. So far, so good – he doesn’t seem to care much about them.

Just to be safe though, I spent the last day of my Thanksgiving break sorting through our holiday decor, picking out the “Cooper-proof” ones. In other words, the ones that I won’t be heartbroken if they get eaten, broken, or otherwise destroyed.  We’ll let you know how it goes!

Cooper would love a furever home of his very own for the holidays! If you’re interested in adding Cooper to your family, please fill out an adoption application with Agape Animal Rescue.

9 responses to “Ain’t No Party Like a Pittie Posse Party!”