Here in Nashville, we have our very own Parthenon.  No, really, we do. It’s a full-scale replica of the Parthenon in Greece, originally built as a temporary structure for Tennessee’s 1897 Centennial Exposition.

Tennessee Centennial Exposition
Photo Courtesy of the Metro Parks Board

It was so popular with the citizens of Nashville that the city decided to have it rebuilt as permanent building in 1921.  It was completed in 1931 after about 10 years of construction – which is about the same amount of time it took the ancient Greeks to build the Parthenon in Athens. 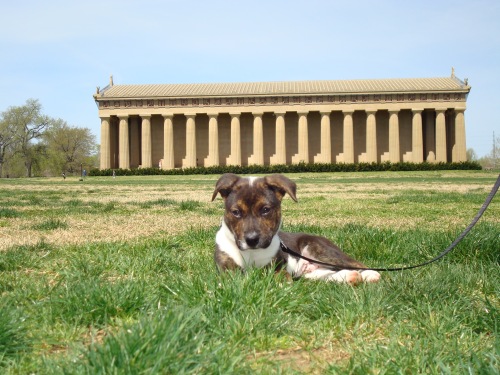 Located in what is now Centennial Park, the Parthenon is a popular photo backdrop for tourists as well as native Nashvillians.  Oscar visited the Parthenon the weekend we sprung him from the shelter, and  Molly Tamale did some sightseeing as a special outing with Foster Mom & Foster Dad, the morning of the day she went to live with her Furever Family… 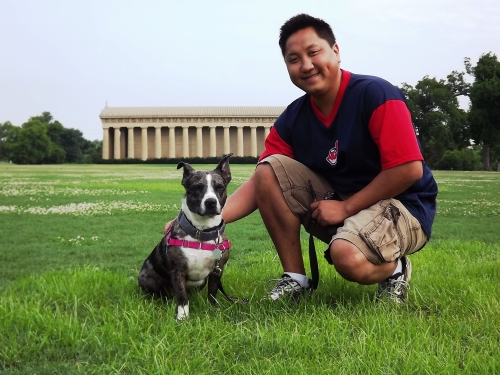 And last week, I was telling Cooper all about the Parthenon and he was all, “What the what? Why have you not taken me there yet, woman? I gotta check this out for myself…” 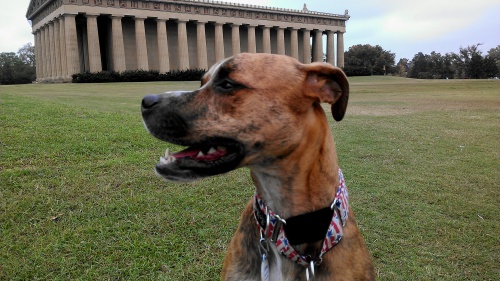 “Momma can we take a closer look? Pleeeeze?”

The intricate carvings above the columns on the East and West ends of the building are scenes depicting a story in the life of Athena. Fun fact, they are covered with netting to deter birds from building nests and dropping little “gifts” on the tourists below.

Cooper thinks it’s super-cool that just like the real deal, no two of the Parthenon’s 46 columns are the same diameter and aren’t evenly spaced apart.  They also all incline slightly inward, which gives the illusion that the Parthenon is even taller than it actual is (which is 65 feet, if you were wondering).

While dogs are welcome to enjoy the surrounding park and views from the outside, Cooper wasn’t allowed to see the full-scale replica of Athena inside the Parthenon.  He was very disappointed.

Where would you take Cooper sightseeing if he was Yours?  If you’re interested in adding Cooper to your family, please fill out an adoption application with Agape Animal Rescue.

…and don’t forget to VOTE for COOPER!

Tagged as Cooper, Molly Tamale, Oscar, Out & About

9 responses to “Cooper Takes the Parthenon”