While enrolled in the Basic Family Dog Manners class, it became clear that Cooper was going to need some specialized attention to help with his reactivity.  On the first day of class, Cooper got pretty vocal with another dog.  What we thought of as “reactivity,” our trainer, Kat Martin, immediately recognized as fear.

Cooper’s behavior was especially confusing  to us because it was a new behavior – he hadn’t always acted this way.  When Cooper first joined us at Foster House at the end of January, we went on walks at the park and around the neighborhood…

…and as recently as April, we were regulars at the dog park.

However recently, encountering another dog during any one of these activities has been enough to send Coop into a tail spin.  Naturally, since we follow our own rules about dog park etiquette, our trips to the dog park are a thing of the past.  Our neighborhood walks have to be strategically planned to avoid any off-leash dogs.  And adoption events?  Not recently. 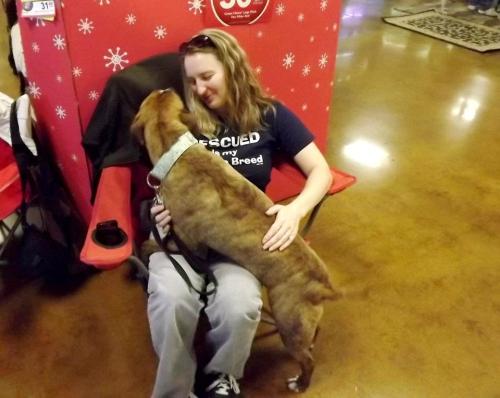 Now suddenly, when Cooper gets nervous, he immediately lets other dogs know, “Hey back up!  I don’t know you and I don’t like you in my space!”  And he does this vocally.  Cooper’s not a big dog, but his bark is definitely intimidating.  As soon as Coop started exhibiting this behavior we knew it had to be addressed – STAT.

So after Cooper graduated from his basic obedience class, we promptly enrolled in Relaxed Rovers.  The main goal of this class is teaching Cooper that when he gets scared or nervous, he needs to look at his People for reassurance instead of going bananas.

We learn to read our dogs’ behavior, and watch them for signs of stress and how to redirect them before they react. We learn about calming signals and how to recognize them.  Calming signals are universal dog language, physical behaviors that they show to calm themselves down or to calm dogs around them.  Some examples are blinking, licking lips, and yawning (more examples and explanation here).  Exhibiting calming signals in class earns Cooper LOTS of treats!

The “shake it off” – the mother of all calming signals!

One game we play in Relaxed Rovers is called “Look at That.”  In “Look at That,” Cooper is rewarded for looking at another dog and not reacting.  We stand at a good distance from another dog, and as soon as Cooper looks in the other dog’s general direction, we click and treat.  Eventually, we start withholding the click/treat a little longer when Cooper looks at the other dog.   Since Cooper is used to getting a treat now when he looks at another dog, when he doesn’t get the treat right away, he looks at us.  As soon as he looks at us, he gets a click/treat.  Looking at us combined with a calming signal earns extra payoff. This teaches Cooper that good things happen when he looks at another dog, then back at his People.

Cooper has been doing pretty well so far, but the key to his continued success is going to be practice, practice, practice.  We’re still a few classes away from graduation, and of course taking his skills out into the real world and more distracting environments is going to add another dimension to his training.  For now, Cooper remains a “work in progress,” but he is workin’ it every step of the way!

If you’re interested in adding Cooper to your family, please fill out an application with Agape Animal Rescue.