We are huge fans of crate training at Foster House.  Crates act as a dog’s “den” and become a safe place for them to go to sleep, hide, or just chill. They’re also extremely handy when potty training a puppy, or introducing a new foster dog into the house.  And we’ve had pretty good success at it so far.

Oscar slept in “his room” without complaint beginning the day we got him and never looked back.

I love my room.

Tucker took to the crate instantly and loved it as his little hide out.  Sometimes when we’d be watching TV or cooking dinner, we’d look at each other and say, “Where’s Tucker?” only to find him curled up in his crate taking a snooze. 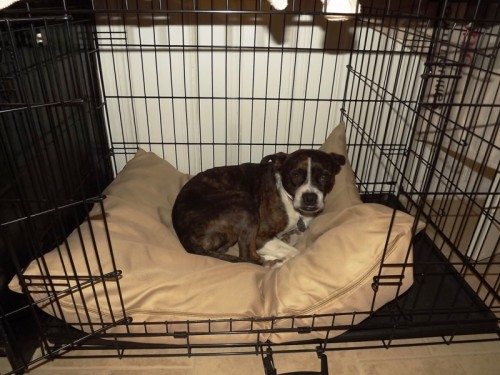 Kaylee on the other hand has been a bit more challenging.  After starting her life on a backyard chain, then spending time in an outdoor kennel before coming to us, she hadn’t really had a lot of experience in a crate.  The first couple nights we had her, she cried for about 5 minutes before settling down to go to sleep.  Unfortunately it went downhill from there, to the point where at its worst, she was crying for upwards of an hour every night when we’d put her in the crate, and then off-and-on all night long, then again starting around 6:00 AM.  She would rather have slept anywhere but the crate, like here: 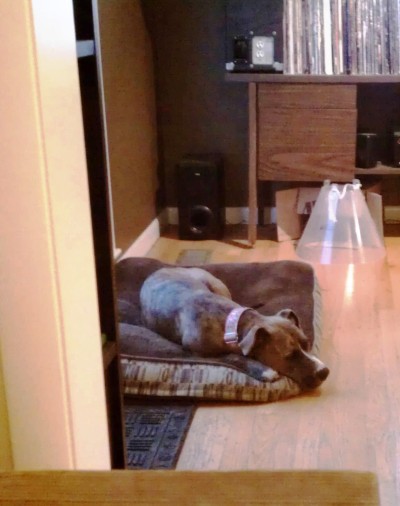 It was rough.  Finally, we got a suggestion to move Kaylee’s crate from the kitchen into our bedroom, with the idea that maybe one reason she’s so distressed at night is because she’s separated from her “pack.”  So we did just that, and you would not believe the difference it made.  We thought for sure she’d still cry a bit, at least at first…but the very first night we moved her crate into our bedroom, she didn’t make a sound. Not. One. Peep.  All night long!

Then, last night, we had a major breakthrough.  As we were starting to power down for the night, Kaylee walked back to the bedroom and went into her crate on her own.  And laid down.  All by herself.  Without us even asking her to!

Let me say that again, because I’m not quite sure you really get how amazing that is: this is the same dog who would dig in her heels when we said “time for bed.” Who we had to literally drag into the crate at night, who could not be coaxed or bribed by treats or toys or anything.  When it was getting late, if we so much as said her name and took a step towards the kitchen, she would pancake herself against the couch, as if to say, “No way, no how, my friends, I am stayin right here.”

I'm good right, here thanks. No crate for me, no thank you.

It’s now been four nights since we moved the crate, that’s four nights of quiet bed times, and sleeping through the night without a sound.  We may eventually work on gradually moving the crate back into its normal spot in the kitchen, but for now we’re just enjoying the peace and quiet. Bliss.