We admit, we had thought pretty highly of our dog training abilities – after all, most everyone who meets him tells us that Oscar is one of the best behaved, well trained dogs they know.  He may not know a ton of fancy tricks, but he won’t jump on you, bolt for the door when it’s open or steal food off your plate.  Our success with Oscar had us feeling pretty good.  “Of course we can foster.  We can train dogs, just look how well we did with Oscar…he’s the most perfectest dog in the entire world!”

Turns out Oscar had us spoiled.  We just happened to seriously hit the puppy jackpot with Oscar’s temperament, which was impossible to predict the day we sprung him from the shelter.  He’s super smart, obedient and well….quite frankly, lazy.  Even in his puppy days, Oscar was quite content to laze around on the couch – once we threw the “no dogs on the couch” rule out the window, that is.

Tucker, on the other hand…we’re stumped.  Don’t get me wrong, he’s come extremely far, and is doing GREAT at a lot of things.  However there are some habits that we just can’t seem to break on our own.   He still gets nervous around other dogs, especially in multiple dog situations.  He’s, let’s just say “vocal” towards the dogs on the other side of the fence in our backyard.  Oh, and there’s this:

Enter: Cathy, a foster and trainer used by Agape from time to time.  So tomorrow, Tucker is headed away to spend about a week with Cathy and her pack for some intensive doggie boot camp training. 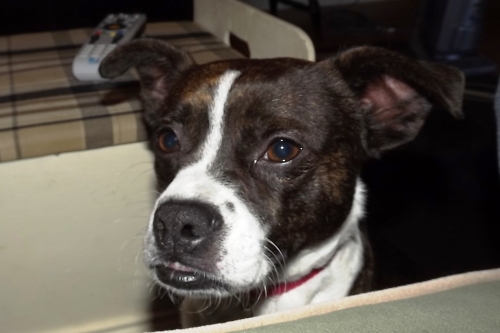 We’re sure going to miss the crap out of that little nugget, but I’m choosing to approach this week without him as a dry run to mentally prepare myself for what remains our ultimate goal: to get him adopted, pat him on the head and send him off to live with his People, forever.